A great guided walk through the center of Siena! 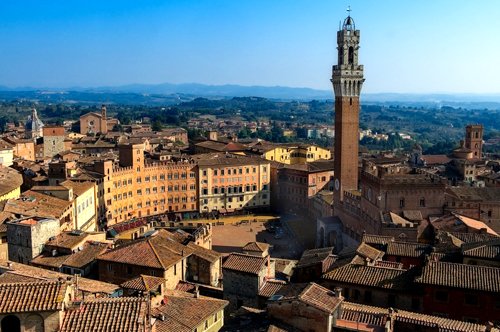 Discover Siena: enjoy your tour with a private guide! 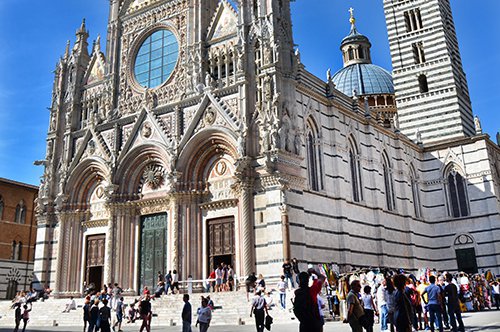 Visit the historic center, Piazza del Campo and the magnificent Duomo of Siena with a private guide!

There are many reasons to visit this beautiful city. Siena is one of the most fascinating cities in Italy, it is a medieval city full of masterpieces of art and architectural wonders; walking through hidden streets and alleys you will discover a new piece of history in every corner.
The three hills from which Siena is born, stand out for its impressive rural landscape. This city has remained intact for centuries, and to a large extent, it shows today as it was in 1300. Siena also has many traditions, among the most important are its culinary tradition and in particular its tasty tradition in confectionery. During your stay in Siena, try the "ricciarelli" sweet cookies made with almonds, panforte, panpepato (sweet bread), rice candy, cavallucci biscuits with spices and walnut or the typical Christmas candy "copate".

A LITTLE HISTORY OF SIENA

Siena was originally a small Etruscan town, which was later subdued by the Romans. In the Middle Ages, the Longobards and the Franks ruled the city, which meant that Siena became an important commercial center; thanks to its position, which was on the Via Francigena that connected France and Italy. This road became a vital link and contributed to the prosperity of Siena as an economic and commercial center.
The confrontations with Florence began when both cities tried to expand their territories. Siena was fundamentally Ghibelline, while Florence was of the Guelph spirit; after numerous confrontations and several battles, between the 13th and 15th centuries, Siena was incorporated into the administration and the Florentine territory. Despite the wars, between 1150 and 1300 many great artists participated in the creation of extraordinary monuments such as the Duomo of Siena.
In 1295 construction work began on the Palazzo Comunale, which was completed in 1340. This public building is the oldest in Italy and has retained its original function over the centuries. Beside it is the Torre del Mangia which was built with a height of 102 meters, an architectural work completed in 1348. In the same year, the plague ended with the majority of the population and caused the inevitable decline of the city.
After several and frequent changes in the government, Emperor Charles V and Cosimo I de Medici slowly made the city flourish, thanks to the famous bank of Monte dei Paschi di Siena, which has guaranteed employment and security for the inhabitants of Siena throughout the centuries. In the second half of the 16th century, the Duchy of Florence and the Duchy of Siena united under the guidance of Cosimo I and formed the Grand Duchy of Tuscany.
In 1859, Siena was the first city in Tuscany to vote in favor of the annexation to the Kingdom of Italy. During the two great wars, Siena experienced a renaissance thanks to its strength in the manufacturing sector and the growth of the University.
In the field of painting and sculpture, the Siena masters were distinguished by their artistic abilities that preceded in some way the period of the great Tuscan Renaissance.

WHAT IS SIENA NOWADAYS?

Siena is located in the heart of Tuscany, surrounded by hills. It is the Italian capital city of the homonymous province. The city is universally known for its rich historical, artistic, scenic heritage and for its stylistic unity of its the medieval urban furniture. Its historic center was declared a World Heritage Site by UNESCO in 1995. Siena is also the seat of the Monte dei Paschi di Siena bank which was founded in 1472, the oldest and long lived active bank in the world.
In the historic center of this medieval city is the famous Piazza del Campo, with its particular shell shape, where today the famous Palio is celebrated, one of the most important events for the inhabitants of Siena. The Palio di Siena is a horse race held twice a year in July and August, and its origins seem to date back to the 17th century.

Did you know that the foundation of Siena is linked to a legend? Walking through the streets and alleys of Siena you will see images of a she-wolf, which has become the symbol of the city. Legend has it that the Tuscan City was founded by the sons of Remus, Ascanio, and Senio. The two boys, fleeing from the fury of Uncle Romulus, brought with them the Capitoline she-wolf that they had stolen from the Temple of Apollo to escape death, the brothers settled in Tuscany and founded Siena.

WHAT TO SEE IN SIENA

You can get to Siena from Florence in 1 hour and a half or from Arezzo in 1 hour and a quarter.
Surely Siena is one of the most visited cities in Tuscany and, although one day is not enough to see everything, you can get an idea of this place rich in history, art, and tradition. But if you have time, we suggest that you dedicate one more day to this area of Tuscany, so you can visit Chianti and other nearby towns.
Start your itinerary in the heart of the city, visit the wonderful Piazza del Campo, one of the most emblematic places in Siena. A square shaped like a shell, unique and unmistakable due to the brick color of the terracotta floor as well as the lining of the buildings. In the square, there are several majestic buildings, among them the imposing Palazzo Comunale, in brick and marble, which houses the Civic Museum with masterpieces of the art of Siena and Tuscany. Visit the Torre del Mangia, an old bell tower of the municipal building built in 1338, after climbing 400 steps, you will enjoy a charming view of the city. Also overlooking the square is the Fonte Gaia, the fountain of the city decorated in its original version, with sculptures by Jacopo della Quercia.
Strolling through the streets of the city among the many shops and businesses that sell typical products, you will reach the Piazza del Duomo, where the treasures of Siena are located: the Duomo, the Crypt and the Piccolomini Library. The Cathedral of Siena or Cathedral of Santa Maria Assunta is one of the most notable examples of Romanesque-Gothic Italian style, enriched with works by Donatello, Nicola Pisano, Michelangelo, and Pinturicchio. The Piccolomini Library, a true jewel dedicated to Pope Pius II, is notable for the richness of its frescoes made by Pinturicchio and his students, among which Raffaello Sanzio stands out. The Baptistery of Siena or Baptistery of San Giovanni was built in 1300 with the expansion of the Duomo. The interior of the Baptistery is very well decorated with frescoes by Siena artists from the Renaissance period and in the center is preserved the beautiful baptismal fountain where sculptors such as Jacopo della Quercia, Lorenzo Ghiberti, and Donatello worked. In the right corridor of the Cathedral is the Museo dell'Opera del Duomo, one of the oldest private museums in Italy.