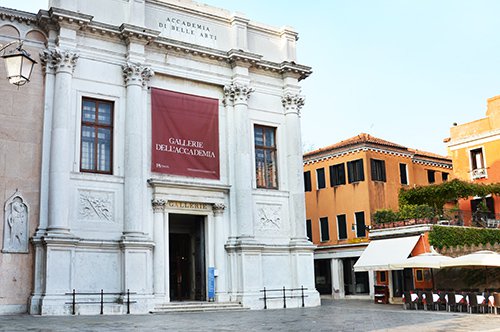 Reserve your priority entrance to the Accademia Galleries and admire the works of great artists from Venice and the Veneto!

Accademia Galleries Venice: Enjoy your tour with a private guide! 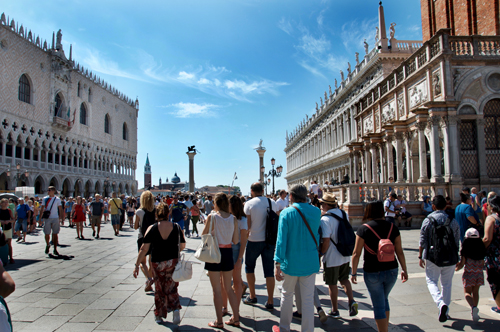 Discover Venice with a private guide and visit the Accademia Galleries!

WHY VISIT THE ACCADEMIA GALLERIES OF VENICE?

In the rooms of the three buildings that make up the museum, the visitor has the opportunity to stroll between the Byzantine art of 1300s and the Venetian art of 1700s. From the first period we find several significant works, including the "Polyptych of the coronation of the Virgin with stories of Christ and Saint Francis" by Paolo Veneziano or also the "Polyptych of Lion” and the “Polyptych of the Apocalypse”. In the pictorial representations of the 1400s it is possible to see works by Giovanni and Gentile Bellini among others. The 1500s has different works by Giorgione, Tiziano, Tintoretto and many other artists; as for 1600s, we find some works by Strozzi, Maffei, Luca Giordano and in 1700s you can admire several paintings by Giambattista Tiepolo, pastel portraits by Rosalba Carriera, works by Canaletto, Longhi and other artists.

A LITTLE HISTORY OF THE ACCADEMIA GALLERIES OF VENICE

The Accademia Galleries of Venice (Gallerie dell' Accademia) occupy several historical buildings: the church of Santa Maria della Carità, the Monastery of the Canonici Lateranensi and the Scuola Grande della Carità (Great School of Charity). They were founded at the beginning of the 12th century in the monastery that housed the canons of Santa Maria and the Augustinians of Frigionia for years. In the 1400s the Augustinians brought some changes and renovations to the complex and in the second half of the 18th century, Giorgio Massari and Bernardino Macaruzzi were entrusted with the task of renovating the buildings of the School.
In 1807 the three plexuses became assets of the state with an edict by Napoleon and were used as the headquarters of the Academy of Fine Arts that was founded in 1750 with the aim of promoting in Venice the teaching of painting, sculpture and architecture and to collect works of art as a source of inspiration and exercise for young artists.

WHAT IS THE ACCADEMIA GALLERIES NOWADAYS?

The Accademia Galleries are today the most significant collection of works by the masters of the Venetian and the Veneto schools. They are one of the most important museums in Italy covering a historical and artistic period that goes from 1300 to 1700, enclosed in a complex of buildings built in part by Andrea Palladio.
The route of the exhibition begins with the Gothic and Byzantine styles of the 14th century, going through the Renaissance with Bellini, Giorgione, Tintoretto, Tiziano among others and ending with the Venetian artists of the 18th century as Tiepolo, as well as Canaletto, Guardi and Longhi. Here also are exhibited a series of sculptures and drawings, and it is in the Accademia Galleries of Venice where you can appreciate the famous and well-known drawing of Leonardo da Vinci the Vitruvian Man.

CURIOSITIES OF THE ACCADEMIA GALLERIES OF VENICE

Did you know that the design of Leonardo da Vinci, the Vitruvian Man, considered one of the symbols of the Renaissance, is rich in scientific and artistic meanings? The circle and the square, the two geometric figures in which a human body is perfectly inserted, represent the Universe and the Earth, respectively. Plato considered the circle and the square as the perfect figures and in Leonardo's Vitruvian Man the center of the circle corresponds to the navel and the center of the square to the genitals, which means the spiritual and physical origin of man.
Did you know that one of the most emblematic works that are preserved in the Accademia Galleries of Venice is Giorgione's painting entitled "La Tempesta" (The Storm) from the early 1500s? Many scholars have given different interpretations of this image to this day without reaching a real conclusion. In the painting a landscape is represented with a city in the background and in the sky the arrival of an imminent storm. The characters represented are a woman who nurses a baby and a man leaning on a cane that seems to be watching them.

HOW TO VISIT THE ACCADEMIA GALLERIES OF VENICE?

For those who wish to visit the Accademia Gallery of Venice avoiding eventual waiting at the tickets office, it is possible to book the tickets online. It is absolutely recommended to visit with a private guide with the possibility of combining it with a walking tour of the city.

From the Accademia Galleries and using the Map of Venice, you can visit all the most famous attractions of this fascinating city. By purchasing the Venice Museum Pass you will have the right to visit the most important Venetian civic museums as well as the Museums of St. Mark's Square. The Venetian Civic museums includes Ca' Pesaro and Ca' Rezzonico, along the Grand Canal. Mocenigo Museum which is seat of the Study Centre of the History of Fabrics and Costume. Also the House of Carlo Goldoni, the famous Venetian writer and librettist, the Museum of Natural History and the two museums placed on the small characteristic islands of the Venetian Lagoon, the Lace Museum in Burano and the Glass Museum in Murano, the three main islands of the Venetian lagoon are Murano, Burano and Torcello.
Starting with a visit to the St. Mark’s Basilica you can visit the museum complex of St. Mark's Square, formed by the Archaeological Museum that displays a collection of ancient statues, bronzes, ceramics, coins and gems, the Correr Museum, which takes its name from Theodore Correr, a Venetian nobleman who left the works of art collected throughout his life to the museum, the Doge's Palace, which was the palace where the Doge of Venice resided and which includes a unique route, the Secret Itineraries of the Doge's Palace; in addition the monumental rooms of the Marciana Library, which contains ancient and precious texts in its interior, being one of the largest libraries in Italy.