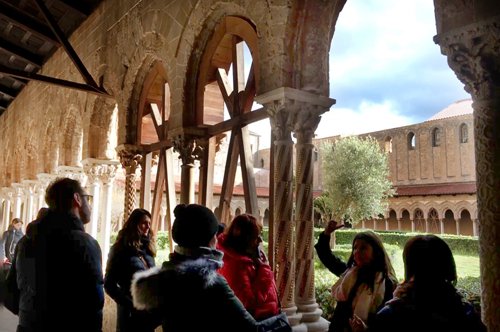 Visit the Basilica of Monreale complex with a priority ticket! 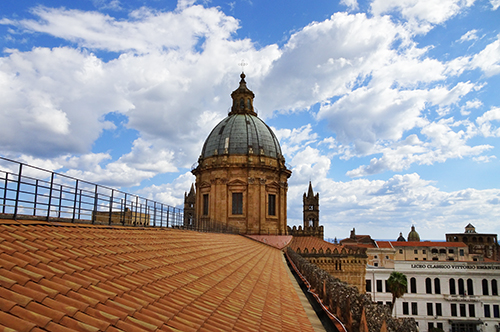 Palermo Cathedral complex with ascent to the rooftops - ticket

The beautiful Palermo Cathedral with its rooftops! 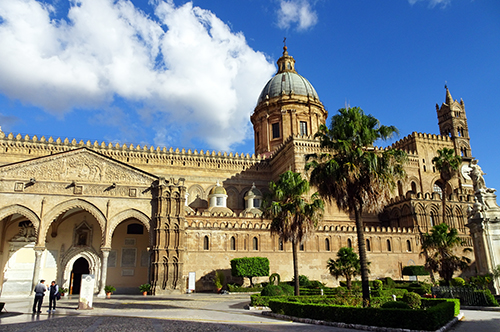 Visit one of the symbols of the city of Palermo 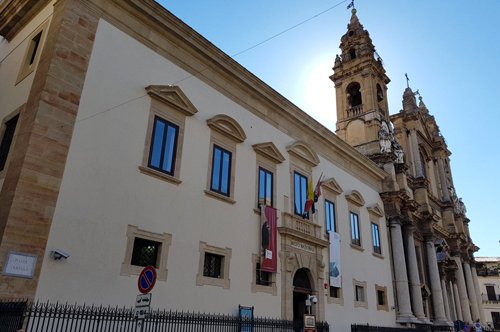 Discover one of the richest collections of Punic and Ancient Greek Art in Italy! 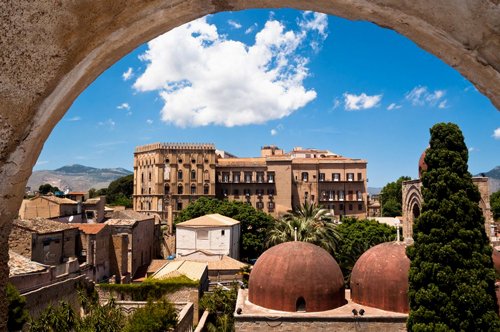 Visit one of the most ancient royal palaces in Europe and explore Palermo! 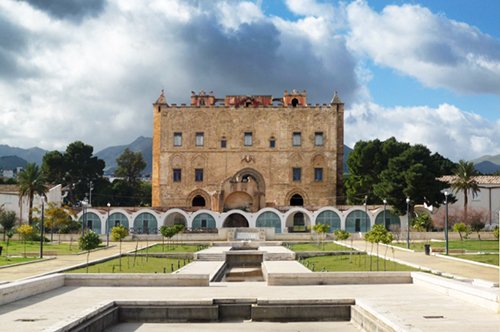 Discover Palermo: Enjoy your tour with a private guide! 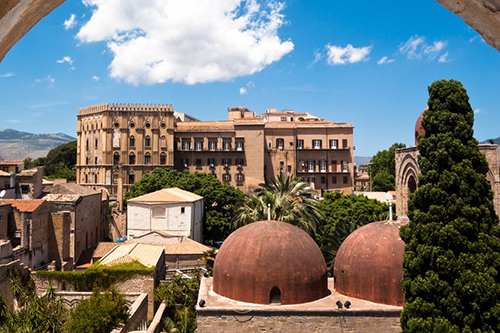 Visit Palermo with a private guide! 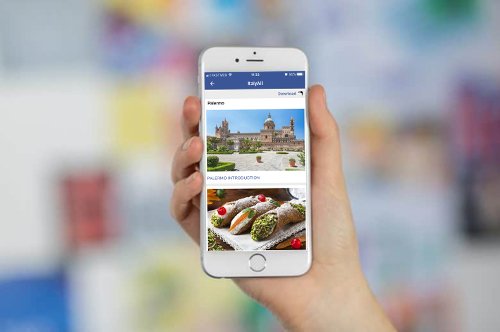 Let yourself be surprised by the streets, the charm, the life and the nature of Palermo: download the app!

Because Palermo is a city that never tires you, with a beauty that fills your eyes and folklore that warms your heart.
Palermo is the ideal place to start to get to know Sicily. Palermo was a Phoenician, Greek and Roman city, an Arab capital, a land of conquest for the Normans, the Swabians, the French and the Spaniards. A city that goes from the Moorish architecture to the great cathedrals, from the local markets to the extraordinary natural beauties. Because Palermo is the city of the mixture of cultures and it is certainly one of the most multifaceted cities in Italy, which delights tourists with delicious culinary specialties.

A LITTLE HISTORY OF PALERMO

According to the graffiti of the Grotta dell'Addaura, the origins of Palermo are ancient and date back to prehistoric times. In any case, it is not possible to establish with certainty its foundation date, but we know that the Sicans, the Cretans and the Elim settled in the area, suggesting a date close to 734 BC when the Phoenicians established a commercial colony called “Mabbonath” meaning inhabited city.
Very early for the Punic, the city became important for trade, forming part of the Phoenician triangle, thanks to its favorable geographical position in the center of the Mediterranean. The name of the city became Zyz (flower), by its particular shape given by the passage of two rivers. The Greeks colonized Sicily in the 8th century BC changing the name from Zyz to Panormos, from the Greek Pan (all) and Hormos (port). This city, like all Phoenician cities, based its economy on maritime trade.
In 254 BC it was conquered by the Romans who changed its name to Panormus (from the Latin). With the fall of the Western Roman Empire, the city invaded by the Vandals and Ostrogoths who set it on fire. In 535, the Eastern Roman Empire included Sicily among its territories, but in 883 the Arabs seized it and called it " Bal'harm" making it the commercial and cultural capital of their kingdom in Sicily. With the takeover by the Normans, the city underwent considerable development; Palermo became a modern cultural and political center under the name of Balermus. In 1097, Roger II installed the first Sicilian parliament and with the marriage of Henry VI, son of the German emperor, and Constance of Altavilla, daughter of Roger II, began the Swabian dynasty that at the command of Frederick II reached the peak of splendor.
After the Swabian domination followed by of the Anjou, who annexed Sicily to Campania, moving the capital and the political center to Naples. Later came the Aragonese, giving way to Spanish domination that ended in 1713 when, with the Treaty of Utrecht, Sicily passed to the Savoy. In 1734, Charles III of Bourbon became king of Sicily and Naples, choosing Palermo for his coronation, giving the city the push to grow and develop. Ferdinand II of Bourbon dissolved parliament in 1816, giving life to the Kingdom of the Two Sicilies; bringing discontent among the population that culminated in the revolts of 1820.
After a popular uprising in 1848, the parliament restored with a committee chaired by Ruggero Settimo, which only lasted 16 months, after which, King Ferdinand IV assumed power until May 27, 1860, the year in which Garibaldi entered Palermo. On January 3, 1861, the Sicilians chose to annexed to the Kingdom of Italy, which would have created only a few months ago.

WHAT IS PALERMO NOWADAYS?

Palermo is the capital of Sicily, dominates one of the most beautiful gulfs of the Mediterranean Sea and has about 700,000 inhabitants. Palermo is the most important commercial center, not only on the island but also in Africa and other countries that dominate the Mediterranean Sea. An island with centuries of history and dominations that have marked its present and future, a city with a thousand faces, crossroads of villages, an amalgam of different cultures and traditions, just magnificent.
Palermo has great artistic value and in recent years has engaged in a project of renovation and revaluation of tourism, thus obtaining a large influx of tourists from around the world. Palermo is a city synonymous of art, sea, good food and magic, in short, a city worth visiting!

Did you know that Palermo, at first, was surrounded by two rivers? Palermo was born between the rivers Kemonia and Papireto. Today it is possible to admire in the place that was once the riverbed of the river Kemonia, in Via Porta di Castro there is a plaque dedicated to this river that no longer exists.
Did you know that the beautiful Fontana Pretoria in Palermo is known as the Fountain of Shame? This work by the sculptor Francesco Camilliani initially was destined to Florence, but when finished, it was sent to Palermo. A source formed by statues of nudes that, at the time, aroused controversy and gossip.

WHAT TO SEE IN PALERMO?

Although all Sicilian cities are wonderful from Syracuse to Catania, Palermo is the pearl of Sicily and offers a selection of exciting and rich attractions. Palermo is a beautiful city, full of monuments, churches, and works of art. In Palermo, you can find the sea, the beauty of the city, a vast cultural variety thanks to the towns that have left traces of its passage and, in addition, it offers an exquisite culinary tradition.
We recommend that you include some of the main attractions in your itinerary, such as:
The complex of the Basilica of Monreale, certainly one of the best examples of how art has managed to tune into the heart of man. The Cathedral of Santa Maria Nuova is the main church of Monreale, in the metropolitan city of Palermo. It was built at the request of William II of Altavilla, king of Sicily since 1174 and is famous for its rich Byzantine mosaics.
The Castle of Zisa is one of the most representative monuments of the Arab-Norman period in Palermo. Although its construction was done by the will of the Norman kings, the architecture of this building has an Arab footprint, even though it has undergone some changes over the centuries. On July 3, 2015, UNESCO declared the Castle of Zisa a World Heritage Site.
The Salinas Museum dates back to the end of the 16th century and houses one of the richest collections of Punic and Greek art in Italy. This structure confiscated in 1866 and, following the law on the suppression of religious orders, was transformed into the Regional Archaeological Museum.
The Massimo Vittorio Emanuele Theatre is the largest lyric theatre in Italy and the third in Europe, it is located in the current Verdi Square. It has an eclectic-neoclassical style that recalls the forms of classical architecture, with its famous staircase, columns with Corinthian capitals, the portico and the large metal dome.
Getting to Palermo is neither difficult nor too expensive: you can take one of the various low-cost airlines and arrive in about an hour from Naples and Rome. You can also reach Palermo by train, boat, car or even by bus.